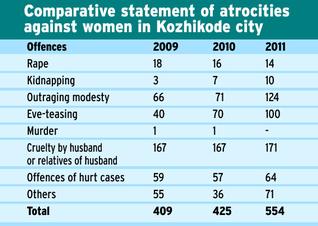 How safe is Kozhikode city for women? Figures provided by the Police Department tell a sorry tale, proving that crimes against women in different forms have been rising in the last few years.

As many as 554 cases of atrocities against women were reported in the city last year. The figure was 409 (2005) and 425 (2010). A large number of cases pertained to cruelty by husband or relatives of husband. In the rural areas of the district, where crime rates are higher, more than 50 per cent of 616 cases reported fall in this category.

Despite the city’s impressive social indicators, domestic violence cases here have been going up. The total cases registered last year were 171. The situation in other districts in north Kerala is no different — Malappuram registered 340 cases; Wayanad, 68; Kannur, 178; and Kasaragod, 108, till June, 2011.

Fourteen cases of rape were reported in the city last year. The number is higher is other police districts in north Kerala. Kasaragod recorded 96 rape cases in the first six months of the year; Wayanad, 45; Malappuram, 35; Kozhikode Rural, 27; and Kannur, 12. But what is puzzling is that several cases — 190 of them — are still under investigation. Those pending trial are 293. Conviction has taken place in 38 cases; out-of-court settlement in 27 cases; and six persons were acquitted. Kozhikode Mayor A. K. Premajam has expressed serious concern over the increase in crime rate in the city. Women organisations did take up issues such as eve-teasing, sexual harassment, and molestation, but, law enforcing agencies needed to be more firm against abusers, especially when girls were now coming forward to complain against the culprits, she said. K.S. Jayasree, general secretary of Streechetana, a forum for women, said that empowerment of women could have led to an increase in the number of crimes reported in the city,” she said.