Streechetana conducted a Campaign to create awareness among the public on the usage of e-toilets on 25th July 2016 at Mananchira Square and on 28th July 2016 at Kidson Corner, S M Street. Members of Streechetana and Students took part in the Campaign. Questionnaires were distributed among the Public to understand the awareness level and usage of e- toilets among them. Pamphlets regarding the usage of e- toilets were given to the public, mainly women. 200 samples were collected from the public.

Streechetana made a protest on 28th july 2016 against the poor condition of the public toilets in many places like Mofusil bus-stand,Palayam bus-stand,valiangadi,Near State Bank of India, and Mananchira   even after the orders made by Ombutsman. The toilets are not properly maintained and the buildings are in broken condition. Public especially women find it very difficult to use the toilets because of the poor infrasructure and uncleaned surroundings.

Streechethana made an appointment with the city police commissioner with a request to remove the unauthorised parking infront of the toilets.We also made a request to the district collector to consider the poor condition of the public toilet in the beach and also to take immediate action to renovate the toilet complex.We got an assurance from the collector regarding the  renovation of public toilets within one week in response to the request made by Streechetana. 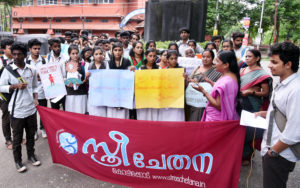