Training was started by Streechetana for women at two centers – near Civil Station and at Chakkorthakulam in April 2009. About 30 ladies participated in the 2 month training programme conducted   by Smt. M. Bijali and Smt. P. Sheeja in several batches. 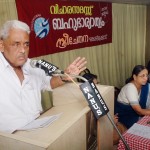 Freedom of Movement for Women

The next Patana Sadass was held on 2nd August 2008 on the topic “Freedom of movement for women”. Smt. Vidhu Vincent, freelance journalist presented the paper. She held the view that lack of exposure restricted the development of women. The experiences gained through movement helps the women for the development of their personality and widen […]

Distribution of Notebooks at KANNANCHERY

Note Books were distributed to the needy students at Kannanchery near Kozhikode, on  8th June 2008.

Why Women should read?

Yet another Patana Sadass was held on 17th May 2008 on the topic “Why women should read? “. Smt. K.P Sudheera, the well-known writer in Malayalam presented the paper. She pointed out that only the physical beauty of women gets increasingly portrayed due to the over influence of the media. Women should possess a face […]

Personality Development of Women – Necessity of the Times

The first Patana Sadass of 2008 was held on 29th March. The topic of the programme was “personality development of women- necessity of the times”. Smt. Vatsala Ramdas of Thanal Suicide Prevention Centre, Kozhikode, presented the paper on the topic. She exhorted women to march ahead with the goals of progress and social well-being. To […]

A training programme for women in paper bag making and screen printing was organized from February 16th to 20th, 2008 in collaboration with Canara Bank. 26 selected women attended the four day training. A two day training programme for women in making fancy ornaments was organized in association with Canara Bank on 21st and 22nd […]

A two day training programme for entrepreneurship development among women was conducted under the joint auspices of Streechetana and Canara Bank on 30th November and 1st December 2007. The programme was held under the guidance and with the co-operation of the Entrepreneurship Development Institute of India, Ahmadabad. The workshop was inaugurated by Canara Bank Divisional […]